I’ve been asked for some time what .308 AR style rifle I’d recommend for those who don’t want to shell out the coin for something like a SCAR 17s or some of the high end AR-10 style rifles on the market.  I’ve been hesitant simply because it wasn’t something I’d personally ventured into and not at the lower price points.

While prices for AR-15 style rifles chambered in 5.56 have plummeted recently, the offerings in .308 have stayed relatively flat. Likewise other .308 rifle offerings have held on as well, only recently have we seen the M1A finally start to come down in price.

In my searching I’ve come across what appears to be a very solid offering from DPMS in their G2 line.  I picked up their Recon model and it seems to be a solid rifle and the price point makes it even more attractive. 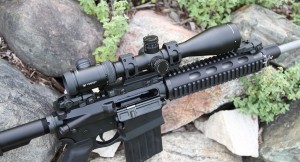 One of the first things you’ll probably notice on the G2 Recon are the magpul accessories such as the stock, pistol grip and backup iron sights (MBUIS).  You’ll also notice the forward hand guard has a quad rail system and a free floated 16″ stainless steel bead blasted barrel.

In the full review I’ll cover some other features such as the monolithic bolt carrier and extended ejection port and commonality with some off the shelf milspec parts.

For this initial look I was concerned on getting out my first impressions and getting the rifle and optic on paper.  Sight in with the iron sights was quick, with minimal adjustments I got the MBUIS to a rough zero.  Next I tackled the Vortex Viper PST, which I had on an American Defense QD mount.

My initial impressions on the G2 Recon are quite positive and I’m looking forward to getting some more trigger time with it and putting it through it’s paces.  Not to mention getting some match ammo and shooting it for groups.

As those of you who are following the 13C channel know the new property is finally a reality and I’ve had my hands full with it, the full range won’t be done for a couple of months.

I made a short video of the hour or so I was able to get out to a public range and get sighted it, be sure to check it out on the 13C YouTube Page and subscribe for the full review coming later.

*Originally posted by Joe at TheBangSwitch