Back up Iron Sights? How and why we decide what gets them and what doesn’t. 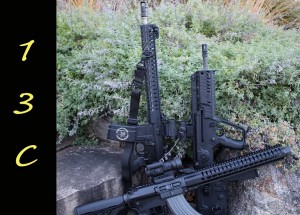 Back Up Iron Sights (BUIS)

We get asked quite frequently “Why don’t you have back up sights on that?”  or “What no BUIS? That’s gutsy”

Sometimes we also get comments such as “Why do you have backups with an Aimpoint on there? It’s not like the Aimpoint is going down on the range.”

First let’s cover the “Aimpoint reliability” issue.  Aimpoint has a great history and track record for being very, very reliable sights, even under adverse conditions.  While highly unlikely, any thing (including irons) can fail. For a review of the 3 Aimpoints in this picture click HERE .

Rifles that get backups-

In the above image we see three of my rifles.   The AR to the top left is a CMMG Mk4 RCE in 5.56.  This is my “Go-To” AR here on the Hacienda.  It sports what is, IMO, the best micro red dot on the market today, an Aimpoint T2.  The chances of this T2 failing?  Slim to never.  That said, as my PRIMARY AR-15 it has both the most reliable and highly rated red dot I own and in addition the best and highest rated (again IMO) back up iron sights as well, Troy battle sights.  Because this is my primary AR, I have the Troy Battlesights with Tritium inserts.  Overkill?  Perhaps but the chances of both my dot AND my irons failing on this rifle would be astronomical and this is my PRIMARY AR.  Why play fast and loose with your primary AR?  Do it right.

Also in the above image is a IWI Tavor X95.  This is one of my Go-To Tavors (the other is a SAR), this X95 sports a H2 and since the rifle comes with very study BUIS’ with tritium already that safely recess down into the top rail, I don’t have to add any sights.

Rifles that don’t get backups-

The third rifle in that image (bottom) is the CMMG Mutant AKS13.  This rifle easily could be a “Go-To” here on the Hacienda but I’ve standardized all of our belts and armor loadouts with 5.56 Hexmags, so it isn’t a primary.  This rifle sports a Aimpoint PRO and no BUIS, if I needed it for self defense, I wouldn’t hesitate to grab it as is. 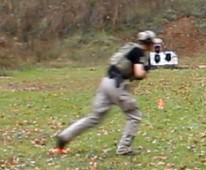 I ran a level 2 carbine class with the Mk4 RCE pictured above but with the PRO and no BUIS when I first got it as part of the testing phase.  I had a couple of comments that running the class with no BUIS was “asking for trouble” if my PRO went down.  True perhaps but I did have another rifle ready to go in the Jeep if the Mk4 or the PRO went down but I was confident the PRO would hold up.  In addition to it not being life and death if it went down in the class, I have faith in the optic to work. 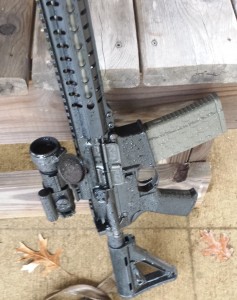 Even if it gets knocked around, which it did, and even if it’s get wet, which it did for most of the day, it’s going to still be working at the end of the day.

This then begs the question, “If you trust your optics so much, why even bother with BUIS then?”

Therein lies the rub, if an optic went down in class, worst case I miss a string or two of fire while I get another rifle.  Worst case in having the optic fail in real life is that I or my family die.

One caveat, realize if your optic dies DURING a firefight or just as you bring the rifle up, you need to practice and train on using the optic tube as a huge peep sight.  This actually is actually easier than it seems at close range and much more difficult than you would think at longer ranges.  In either event, practice for such failures because you can’t call time out in the middle of an exchange of gunfire to bring up your BUIS.

Even in a primary rifle, do you *need* Backups?

I mentioned “in the middle of a gunfight”.  Imagine this: middle of the night and something crashes at the other end of your home.  While it may be prudent for some to “shelter in place” others don’t have the luxury of hunkering down and waiting for police.  You child or spouse might be at the other end of the house.  That crash you heard, was it a coyote or racoon breaking into the hen house or a criminal breaking into the barn?  Can you call 9-1-1 for every bump in the night?

Scenario: That crash happened and you have to go investigate, for the sake of you child/spouse/animals.  You have quick access to a rifle, be it a bedside safe or Tactical Wall solution, grab it and realize the optic is dead.  Here you have the 1 second to flip up those sights… if you have them already mounted and zero’ed.   This would be the main reason for having backups on a home defense longarm.  Deploying them once contact is made is highly unlikely but not completely out of the realm of possibilities.  Just as an aside, if you have a longarm for self defense, please make sure you have a weapons mounted light on it.  While optional for a handguns, it’s a must for longarms IMO.

Backups for a scoped rifle that doesn’t have a QD mount.  Why would you? It’s pretty much impossible, if not impossible to use BUIS looking through a scope.  Caveat here would be offset irons which with practice can be very efficient and quick to use. 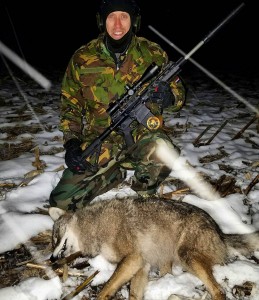 As to the rest of my long arms, some have backups, most don’t.  A good example of backups that would almost never be used but I have on the rifle anyway is my G2 Recon.  It has the Magpul BUIS the rifle came with and I am leaving them on.  The G2 Recon is one of my DMR’s and the optic is on a ADM QD (Quick Detach) mount.  If the scope fails, I can revert to irons.  Keep in mind it’s going to take a solid 2-3 seconds to get that QD mount off.

Hopefully this answers most of the questions I’ve had on this topic.  If you have any other questions feel free to ask them over on our Facebook Page .

As an Oath Keeper Joe is known for his staunch, unwavering defense of Liberty and the Constitution. His background in medicine, from the streets as a FF/EMT to a level 1 trauma team, bring a unique perspective to TBS team. As a life long firearms enthusiast you may also recognize him from his work with MAC and as founder of 13C Gun Reviews.
View all posts by Joe →
Reviews aimpoint, back up iron sights, back up sights, back ups, backup iron sights, backup sites, buis