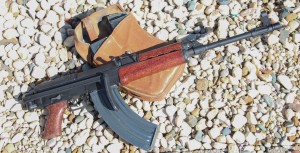 The rifle has some unique features you won’t find on an AK such as a last round bolt hold.  The benefits of a last round bolt hold cut two ways.  While they can facilitate a faster mag change, you leave the internals of your rifle wide open to fouling which is one reason why you don’t see that feature on some military rifles.  There is also a stripper clip guide on the top of the bolt that allows the magazine to be reloaded while still in the rifle, reminiscent of the SKS bolt design.  While the rifle is easy to break down, there are several differences between it and it’s look alike big brother the AK, you can see the VZ-2008 broken down HERE. –

You can see my entire article over on The Bang Switch