Thoughts on home defense and the PS90 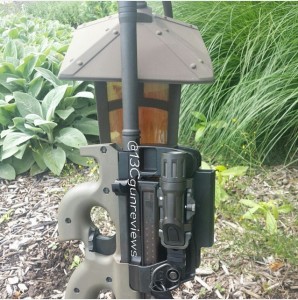 As a homeowner, husband and father of three I have a lot of responsibilities and holing up in the master suite with a scatter gun simply isn’t in the cards for me.  If something goes bump in the night, I need to investigate it.  If I suspect a bad guy is in my home, I have to leave the relative safety of the bedroom and secure my daughters.

Now that the “let them come to you crowd” has been taken care of, let’s get down to brass tacks.  What tool(s) will make that job easier and safer, both for me and my family.

Given the time, I’d roll out of the master suite with body armor, in addition to having a rifle (in that case a Tavor) but that is a topic for another article.  My PS90 is my rapid response rifle and stored in a different location.  In a concealed shelf from Tactical Walls to be precise.

My requirements for a home defense long arm are fairly simple.  It has to be easy to maneuver, it has to be easily handled with one hand, it needs to be able to accept a mounted light and above all else it must be 99.999999% reliable.

Easy to maneuver.  This lends itself to the Over All Length (OAL) of the firearm and that’s where bull pups start to shine.  The PS90 (like the Tavor) is at the minimum legal OAL for rifles in the US without having to get a tax stamp and all the hassles involved in owning Short Barreled Rifles (SBR) .  That isn’t to say it isn’t easy, relatively speaking, in my area to do so but rather that it’s not a route I choose to travel for my self defense firearms.  Making turns is inevitable, having to open doors or manipulate items / switches are all considerations which bring us to my next requirement.

Ease of handling one handed.  This doesn’t mean I’ll be firing from the hip one handed, it means I want to be able to control my rifle with one hand * should the need arise * .  I mentioned earlier I have three daughters.  Might I need to grab one with one hand?  The probably lessens with each passing year but it is still a very distinct possibility.  Might I need to grab the collar of a rather large Rottweiler with a strong desire to eat anyone who isn’t an invited guest?  Most certainly.

Why not use a handgun?  A very legitimate question and quite frankly when I owned a much smaller home, such as my first home weighting in at an astounding 925 square feet, I did.  I still use a handgun as a primary when needed and would still use a handgun over a shotgun, rifles have several distinct advantages.  In addition to having a higher capacity, they are easier to aim, quicker followup shots and actually have stopping power.  Stopping power is a discussion in and of itself and this isn’t the place for it but simply put, rifles and pistols aren’t in the same category when it comes to effect on the human body.  They can also be used as club if things go from bad to worse.

Ability to accept a weapons mounted light.  This pretty much speaks for itself, be it integral such as the setup on my Tavor or rail options, having a light is a must.  A significant portion of home invasions happen in low light conditions.

Reliability.  Simply put, if I  press, squeeze, pull, yank, jerk, mangle or otherwise cause the trigger to move rearward it MUST go bang.  Every. Single. Time.  All the cool lights, rails and OAL aren’t worth jack if it’s not putting lead down range every time the trigger is pressed.  This is a huge reason why I’m not a huge fan of pump shotguns.  Under stress it’s a lot easier to short stroke than many people care to admit.  Pump actions are only as reliable as the person manipulating the pump.

That lands us on the PS90.  My PS90 has hundreds upon hundreds of rounds through it without a single malfunction.  It’s as short of a rifle as you can get without going the SBR route (and I’m so very tempted on this one) and it handles marvelously, even single handedly.  It’s extremely light even with a full 50 round magazine and has virtually no recoil, it’s almost like shooting a .22lr.

With the addition of a rail and an Inforce 200 lumen WML light it makes for a pretty potent package.  Considering you also have 50 rounds on board right out of the gate, you’ll hopefully not need a magazine change either, even in the worst of home invasion scenarios seen in the US.

In closing I’ll touch on two things.  The first is the Tavor I keep mentioning.  If I rate it so highly, why not use it in place of the PS90?  Well, I do.  That is to say, given the option, I’d take the Tavor first but I only have one Tavor and that’s my “bedside” carbine.  The use of the PS90 is for my rapid response rifle and located in a different area of the home.

Lights, how many lumens is too many?  That is dependent on your situation.  If you’ve never used a high intensity light inside, try one out.  Shine it against one of your lighter color walls when it’s pitch black in your house, I’ll wait…. HELLO!  How are your retinas?

There is such as thing as too much light.  I use a 200 lumen on the PS90 and it’s more than enough light, even for my large ranch style house.  I have a 320 lumen light in my Tavor and honestly it’s too bright for indoors.  I also use it in case I need to go outside.

I know, I know “don’t go looking for trouble” but I venture to say most people saying that don’t have a wife, 3 daughters, animals and a nice size farm they have to protect either.  What do you think 9-1-1 is going to say when I tell them “I think coyotes are luring my dogs into the field to try and swarm them and eat them, would you mind swinging by real quick?”  Yeah… exactly.

Sometimes you have to seek out the threat, be ready when you do.

I recently reviewed my PS90 and some Federal American Eagle 5.7x28mm ammo, you can find it on YouTube HERE  .

Let us know your thoughts at our Facebook Page .