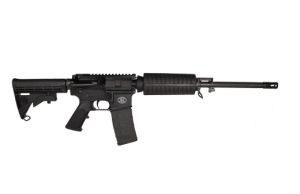 I know, I know, hold on.  Yes the market is saturated but it seems to me FN is filling a missing product niche: something entry level that won’t break the bank.

Speaking of breaking the bank, if Colt had listened to consumers and added an entry level AR to their line up they might not be needing bankruptcy protection right now.  Alas it’s bitter sweet to me because all these awesome smaller companies would have had a much harder time if the “big boys” listened to the market better and didn’t create that opening, but I digress.

The new FN15 1776 will be a minimalist rifle and is being dubbed “optic ready” to make up for the lack of iron sights.  FN says it will be “the company’s modern sporting rifle product line, is designed to be high performance, value-priced, and optics-ready, perfect for shooters looking for a base rifle to customize to their liking.”

What has me scratching my head is the lack of a small rail section on the front gas block.  It couldn’t have added more than $5 in manufacturing costs to the rifle.  If I had to guess, I’d say FN will be offering a full rail to purchase separately as an add on, so it was a conscious and deliberate decision.

Also venturing another guess, I’d say the 1776 will probably street at around $750-$800.  It will feature a 16-inch, alloy steel, button-broached barrel, 6-position collapsible stock, A2-style compensator, and sling attachments in addition to the standard 1913 rail over the receiver.

As an Oath Keeper Joe is known for his staunch, unwavering defense of Liberty and the Constitution. His background in medicine, from the streets as a FF/EMT to a level 1 trauma team, bring a unique perspective to TBS team. As a life long firearms enthusiast you may also recognize him from his work with MAC and as founder of 13C Gun Reviews.
View all posts by Joe →
Reviews 1776, ar15, fn, fn15, fnusa