Unbiased customer reviews worth more for companies than advertising? Some of us already knew that. 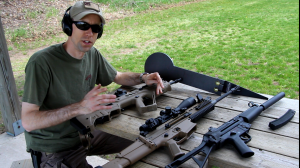 A recent article on Entrepreneur.com caught my eye.  It’s about establishing your business on “review sights”.  The gist of the article is about how important online reviews are and how to get noticed and so forth.

One thing most large companies and ad agencies miss, and that most of us in the firearms world have known for awhile, is each customer is a walking testament to your product. No matter how big you get, you simply shouldn’t be writing any customer off because ‘it’s easier’ or it’s “just one guy”.  In that same token, being a “big guy” doesn’t ring as true to some consumers as the ‘Mom and Pop’ folks that aren’t paid by the companies whose products they review (disclaimer: 13C has never been paid for reviewing a product.  Ever.)

The beauty of today’s digital age is the freedom to post, find and search for virtually anything you can think of.  It’s driving industries to evolve or go the way of the dinosaur.  Some places, like certain main stream media source, choose to become dinosaurs rather than evolve and give the consumer what they want.

Case in point is a ‘sniper’ rifle company that is currently suing a gentlemen AND the internet chat board he posted a negative review on.  I honestly don’t know enough about that particular rifle and the situation to interject my opinion on it but I can say, as a third party observer, that the company in question has probably destroyed itself over this issue.

The blow back is rippling across the net and it isn’t pretty.  If I had to guess the party filing the lawsuit got some line from their attorney that a win in court would be ‘vindication’… the attorney was looking at dollar signs in this case, not their clients best interests.   Even if they win, who wants to buy from a company that may sue them if they get a dud rifle and write a bad review?   It’s worse than cutting your nose off to spite your face, it’s flat out suicide.

They obviously didn’t read #3 on the article-

Chances are you’ll attract a handful of grumpy customers. Should you ignore them? Respond? Perhaps you should celebrate them, like New York’s JoeDough Sandwich Shop did with a sign outside that read: “Come in and try the worst meatball sandwich that one guy on Yelp ever had in his life.” The truth is, there is no one right answer for dealing with negative reviews. The best you can do is apologize and try to make it right.

Invested as you are in your company’s reputation, the criticism might sting. But it’s helpful to remember that not even Tolstoy earns five stars on Amazon. (War and Peace gets a paltry 4.5.) And, paradoxically, a few negative notices will only add to your credibility, signaling that the reviews are authentic and unvarnished.

You may find yourself the victim of an internet troll who just likes to stir things up. “In those instances,” Kramer says, “leaving it alone is the best path, because the worst thing you can do to someone seeking attention by being mean or negative is to ignore them.”

Crap happens.  Even if you make the best product in the world, eventually something is going to slip through QC.  It’s Murphy’s law.  The question then becomes one of customer service and that is where a company with an otherwise good product can make or break itself.

Today in the firearms community you will find many folks, including 13C, who do what we do because we’ve been there.  We’ve been stuck trying to decide between ABC and XYZ and we’ve made the mistake one too many times of making the wrong choice.

Now that we have an opportunity to help others make informed choices we are doing it.  The internet makes it possible for small independent men and women like us to get our voice out there and to help others.

Being little guys we can’t review everything and we often work together and collaborate with other reviewers to figure out for ourselves how things compare and what works best.  I’ll be the first to admit when I’m looking at buying something new I’m not familiar with, I turn to fellow reviews and give them credit for my choice to purchase when credit is due.

Case in point the TacCon 3MR trigger, after seeing MAC from Military Arm Channel review his, I’m sold.  Would I have given it a chance after the previous gimmick triggers like the infamous TacTigger or HellFire?  Probably not, especially at the price point.

Personally I’m proud to be part of a community that is really unlike any other and I look forward to bringing you fresh new reviews and most of all having fun.  That’s the biggest thing for me, having fun and be able to help my fellow shooters.

I can’t tell you how good it feels to have feedback from you all such as “I was on the fence and bought it after seeing your review, I love it!”  Like wise I like being able to steer someone away from something that might not be right for them.  I have a basement full of stuff I wish I never bought and had some of these reviews been out when I was looking at them, I probably never would have.

Thanks again everyone and don’t forget to check us out on Google+  .  Facebook continues to put the screws to those us in the RKBA and Liberty circles and we are trying to move away from it.