Confiscation of ‘registered’ weapons about to begin in CT. Updated with notice

I’ve said it before and I’ll say it again.  Registration eventually always leads to confiscation.

For those gun owners who dropped their registrations in the mail and they got post marked a day late…well you’ve given the state notarized proof you are in possession of “illegal” weapons or magazines.

I use quotations around illegal because I don’t believe they are truly are.  After all the Supreme Court has ruled that any law in violation of the Constitution is void and that law is most certainly in violation of Second Amendment… but I digress.

State officials are giving these owners “one more chance” to get rid of the banned items before turning those records over to prosecutors.

This ladies and gentlemen is one of the many pitfalls of registering… the law in America today doesn’t care about justice, it only cares about compliance.

Once again we see the State tip-toeing around going door to door and working on intimidation instead.  Why?  I’ll leave it to you for conjecture but how would door to door raids serve for the “we aren’t coming for your guns” crowd?  Yeah…

I offer this for the Law Enforcement officers of Connecticut, remember your Oath and the Constitution should you be called upon to violate the Rights of those you serve: The People.

Update:
This is a copy of the letter being sent out to CT residents in ‘violation’. 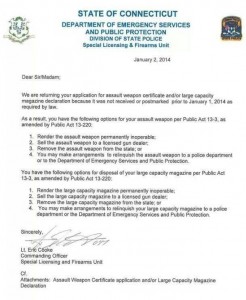