The “Knock out game” continues to spread across the country. It isn’t a myth. 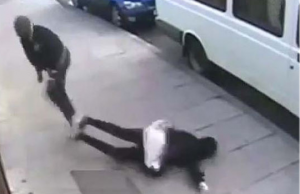 Female Victim of Knock Out Game

This past week the ‘main stream’ media has finally  been reporting on a trend we have been covering for months.  The “Knock Out Game”.

For those still not familiar with it, the premise is a simple and violent one.  Pick a random person and try and knock them out with a single punch by sneaking up on them and punching them in the back or side of the head with all of their weight and strength.  This game is sometimes called “one hitter quitter”.

It is truly a game for cowards, rarely does the assailant pick someone capable of mounting an effective defense, and it is always done ‘out of the blue’.  Usually the assailant is an older teen or young adult and usually a male.  Race may also play a factor in the attacks.  Of the dozens of stories documented on the first 5 pages of a search, all of the assailants have been African Americans and virtually every victim Caucasian or Asian.  There are stories where the victims have been homeless African Americans or of the same race as the attacker so that isn’t always a deciding factor obviously.

The assailants not only catch their victims completely by surprise but usually their victim exhibits some form of ‘weakness’.  Usually the assailant picks someone with a perceived weakness that generally focuses on those of smaller stature, women and the elderly.

Videos are popping up all over of these games and people are dying because of them.  The interesting thing about these assaults is it seems to be bringing reality back to the “if you can’t take a ass whooping don’t carry a gun” crowd.

Folks, as an adult, you need to realize this isn’t the elementary school playground you are walking around in.  This is real life.  You need to come to the reality that punches can kill, that if you get a “whooping” you or those with you could be robbed, raped or killed as part of the aftermath.

Normal people, walking around in a civilized society don’t just ‘get into fights’.  If you are walking down the street or across a parking lot and find yourself in a ‘fight’, you can only assume it’s a fight for your life.

There is only one legitimate response to being the victim of or witness of a “knock out game”:  Violence.  The only way for evil to triumph is for good men to do nothing.  The only appropriate response to a vicious and violent attack is an immediate counter attack of overwhelming violence assured to carry the day.

The vast majority of stories about the knock out game leave the victim seriously injured and in some cases dead.  In only a few cases has the victim successfully fought back.  One man from Michigan, waiting on his daughter at a school bus stop, lucked out when teen snuck up from behind him and tried to tase him.  The taser malfunctioned and the would be victim turned the tables and shot his attacker twice.  The teen admitted to police he was playing the knock out game and his friends put him up to it.

Looking back at the Trayvon Matrin event, I have to wonder if Trayvon decided to play the knock out game on Zimmerman that fateful evening?  The game itself has certainly been reported going back that far and Martin had a history of violence and fighting.  His facebook page was rife with posts and pictures embracing the ‘thug life’.

When out and about you need to keep you head on a swivel.  Your situational awareness will determine if you get blindsided or have a chance at dodging or surviving the encounter.

You need to learn how to ‘Manage Confrontations‘ from the very start.  In virtually every single incident of ‘knock out’ we’ve seen, the victim had no idea they were in a fight until they woke up after being decked… assuming they woke up.  There are numerous classes available that can teach you everything from recognizing prefight indicators to deterring an attacker from even initiating the fight.

While the old ‘routine’ crimes may be declining, the violence and intensity of some crimes, like flash mob mini riots, knock out games and home invasions are on the rise.

Be safe and stay vigilant.