Mini-riots, wildings and flash mobs are increasing. Do you have a plan for them? 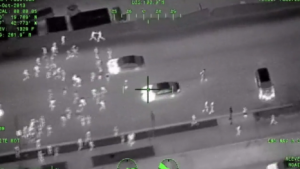 Mini-riots, flash mobs or “Wildings” as they are being called are becoming more and more common across the US.  These “wildings” are usually perpetrated by younger males, sometimes as young as 13 years old, although the Chicago incidents over the spring and summer had numerous young females also participating.

It seems no section of the country is immune, not even in the nicest areas, like this incident<video> from Chicago’s “Magnificent Mile” where reports range as high as 500 “urban youths” attacked shoppers and police back in March.

This most recent ‘wilding’ happened in Austin Texas, outside of the House of Torment Haunted House, where a crowd of approximately 200 descended upon a mall parking lot and chaos ensued. Follow the link<video> for some overhead FLIR imaging.

It’s interesting to note that the haunted house house wasn’t involved, probably because responding officers cars lined up in between the parking lot and the haunted house.  Either one purpose or by accident.

Unless you plan on never leaving your house, you have to come to the realization that you may find yourself in the middle of a “wilding” one day.  Even the best situational awareness may not buy you enough time to steer completely clear of an event like this. 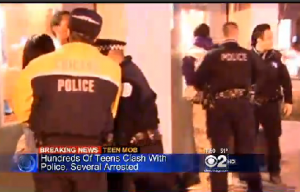 The Chicago incident (one I have firsthand reports of from local police who responded) had a “swarm of hundreds descend in a matter of seconds and sweep through the strip”.  Imagine getting 15 feet out of a store door and from around the corner or alley 50 teens and young adults come sprinting out with basically no warning… from multiple directions.

The shoppers and police in Chicago, several of whom were on foot on the magnificent mile at the time of the mini-riot were overrun, including officers on horseback.  Shoppers were robbed of purses, packages and wallets.  Many were beaten and several were sexually groped by the mob.

Not everyone takes their responsibility for their safety and that of their friends and loved ones seriously.  I occasionally take heat from fellow gun owners because I carry a full sized handgun (a G19 or XD9) and at least one spare magazine with me at all times.

I hear the same tired B.S. from these lazy people, it usually goes something like this “If I need more than 5 shots, I’m doin’ something wrong”.

Really?  That’s awesome you know how many rounds you’ll need in a gunfight.  Tell me again how many life or death situations you’ve been in?  Zero huh… How many gunfights?  Zero again… How many training classes have you taken? NRA hunters class… That’s super. 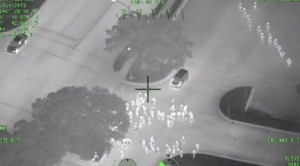 Gangs have taken to using mass text messages and social media, let alone old school tactics in disturbing new ways.  They are becoming more brazen and consistently have less fear of police.  Want proof?  Watch that video of the crowd going after virtually the entire on duty shift of the Austin PD and only 5 of them getting arrested.  The Chicago incident?  Out of 500 rioters, only 17 were arrested.  That’s even more shocking because of where it happened and the fact that hundreds of Chicago PD officers were on scene within 10 minutes of it starting.

I’m not saying you have to be paranoid, I’m saying be aware that bad things happen and you could find yourself caught up in the middle of something, no matter how great your situational awareness it.

Does the training you have taken or you are going to take help you in these types of situations?  If you took one defensive handgun class where you stood still and shot a few tight groups at a piece of paper, you probably aren’t where you should be in your skill level.  I won’t get into the details here but you need to have a full compliment of skills that don’t just include shooting.  After all you just can’t start shooting because a few dozen people happen to be running in your general direction.

Don’t just plan for it, train for it, because you alone are responsible for your own safety.

If you have any comments or have experienced a wilding, please visit us on our FaceBook page and tell us.