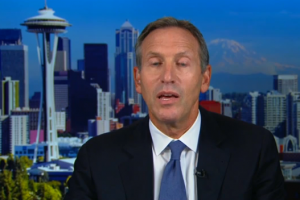 Starbucks has taken quite a bit of heat of it’s request for customers to not carry weapons into their stores.  This request is what I would refer to as a “soft ban”.

Starbucks CEO Howard Schultz took to CNN to try and shed some light on his recent open letter to customers where he “requests” they no long carry into their stores.

He drones on and on about the company not being a “policy maker” and how the company is “neither pro or anti gun.”.  Some in the gun community view this “request” as some sort of code that Starbucks is progun, because it is a “request”.  I think that argument *could* have been made prior to this CNN interview.

In the interview Schultz makes several references to customers being uncomfortable and so forth but listen for the classic key words such as “children”.

The “Request isn’t a ban”…  that’s what some people are saying.  I think it’s important to note that in some states, carrying into a Starbucks now could be a crime, because a “request” may satisfy legal requirements.

The Starbucks CEO ends the interview with these words:

“When you are on right side of your values and believe strongly…. I’ve made this decision through the lens of civility and respect and in the best interest of our people, our customers and our company.”

“I believe very strongly it was the right decision.”

You can share your thoughts on Starbucks decision and if it will affect your coffee purchases at our Facebook page.

You can judge for yourself where the CEO stands by watching the full interview here: