Where does pacifism come from? Dealing with a murderer by “talking to them”… VIDEO

Where does pacifism come from?

I’ve asked myself this question and you may have too.  Often times we try and imagine these people come from sheltered lives where the “idea” of violence is one removed from them and it’s more of an abstract thought than something real.

If we do think of someone who has been exposed to actual violence, especially on a large scale, who still espouses pacifism even in the face of imminent death, it’s almost always a image of someone like Mother Teressa or someone else equally religious or supposedly pious. 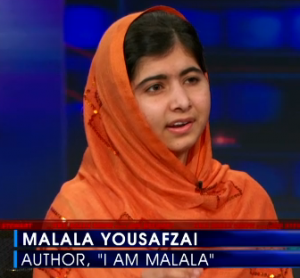 What about someone who grew up in a relatively peaceful place?  Who’s life got turned upside down by violent terrorists moving into the region and then started blowing up numerous schools and children?  Murderers who would regularly execute townspeople and are now about to kill YOU?  Could anyone in that situation be a pacifist? Apparently so, or at least they allege they would be.

Meet 16-Year-Old Malala Yousafzai.  Malala has experienced what I have just described.  Up until the part of actually being confronted personally anyway.

“I started thinking about that, and I used to think that the Talib would come, and he would just kill me. But then I said, ‘If he comes, what would you do Malala?’ then I would reply to myself, ‘Malala, just take a shoe and hit him.’  But then I said, ‘If you hit a Talib with your shoe, then there would be no difference between you and the Talib. You must not treat others with cruelty and that much harshly, you must fight others but through peace and through dialogue and through education.’ Then I said I will tell him how important education is and that ‘I even want education for your children as well.’ And I will tell him, ‘That’s what I want to tell you, now do what you want.”

Perhaps, in America, we could ascribe such a pie in the sky thought process to a typical 16 year old girl.  One who spends her days reading glamor magazines and who’s hardest life challenge is getting her double half grande latte with a smidge of soy milk as opposed to a schoach of that retched half and half.

This isn’t your typical 16 year old.  According to her claims, she’s seen the aftermath of hundreds of school bombings and murders by these “Talib”.  While her ‘fight’ for education is admirable, it shouldn’t negate her suicidal tendencies.

I don’t want to seem mean or cruel but I have to say it:  What sort of warped perspective and faulty thought process must a person have in order to believe that the proper response to someone who has murdered hundreds of people, including children, and is now about to kill you is to respond by saying: “how important education is and that ‘I even want education for your children as well’.'” Then submit to whatever the terrorist wanted to do with you? 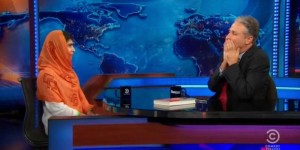 It’s suicidal.  It’s certainly not something to be commended over or for Jon Stewart to swoon over nor that of his audience.  You can see the video HERE.  The embed isn’t working at the moment.

I have no idea what makes the pacifist tick.  I have no idea how someone could think fighting back against someone whose chosen profession is blowing up children and schools would make you ‘just as bad’ as them.  It’s absurd.  It’s worse than that, it truly is suicidal.

I wonder how those dysfunctional genes and traits have survived so long in the human species.  You would have thought Darwin would have weeded those people out millennium ago… although thinking about it, they generally had different names for pacifists back then.  They were called serfs or subjects and sometimes slaves.  That would explain Malala’s desire to: ‘submit to whatever they wanted’.

While we may not know why a pacifist thinks the way they do, we do need to realize these people exist and perhaps they, unlike a person who murders school children, can be reasoned with.

This young woman and her pacifism is going to be paraded around the globe next week as she is poised for a 2013 Nobel Peace Peace prize.  No, I won’t be getting into the lunacy of that contest or what a joke it has become in this article. 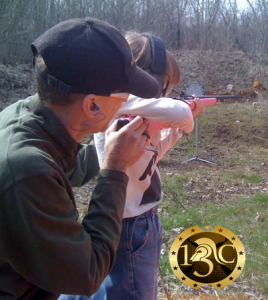 If you run into any pacifists, do your best to try to gently explain to them the best way to educate a murderer is with hot lead.  Preferably copper jacketed, moving at hundreds of feet per second and passing through their face on the way into their brain housing unit.

The Right to self defense is an unalienable Right and I can guarantee you my daughters know how to properly deal with murders.

As an Oath Keeper Joe is known for his staunch, unwavering defense of Liberty and the Constitution. His background in medicine, from the streets as a FF/EMT to a level 1 trauma team, bring a unique perspective to TBS team. As a life long firearms enthusiast you may also recognize him from his work with MAC and as founder of 13C Gun Reviews.
View all posts by Joe →
News Stories, Political, Uncategorized chive on, daily show, jon stewart, malala yousafzai, news, pacifism, pacifist, peace prize, terrorism, terrorist