Is the coverage of Mass Murders purposefully deceptive? -VIDEO-

During the tragic murders at the Navy Yard I was spending the day with my family and basically ‘unplugged’ from the situation as it was unfolding.

I received several messages from friends and via the 13C Facebook page, not just about the shooting but about some of the on air coverage and what was happening. 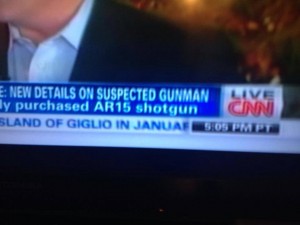 Things like “AR-15 Shotgun”.  Sure there is a ‘AR shotgun’ on the market but that’s not what was used.

Some will ascribe this to the ignorance of the news media when it comes to firearms, they will easily write this off but I’d be willing to bet the term made it past the editors because “AR15 shotgun” sounds really scary.

I think it’s long over due to start changing the terminology as well.

How about ‘active murderer’ as opposed to ‘active shooter’?  Why is it is a ‘mass shooting’ instead of a ‘mass murder’?  Would this be any less egregious of an event if a knife or chainsaw was used?

Of course not.  Their agenda is the same, to blame the firearm(s) instead of the person with murder and malice in their heart.  Something no talking head is mentioning is that once again a mass murder happened in a “gun free zone”.  In fact every single mass murder involving a firearm, except one, has occurred in these so called “gun free zones”.

Perhaps not everyone on TV is oblivious to the lies streaming from the main stream media, I leave you with a clip from the Daily Show where Jon Stewart calls CNN out on the carpet for it’s coverage, the segment is entitled “Wrongnado” –