Selecting an AR15 and the Mk4 RCE from CMMG 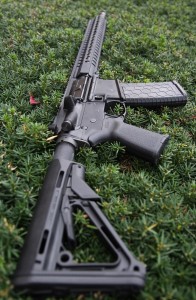 In a previous article we talked about the question of “Which AR should I buy?” and how it isn’t as straight forward of a question as it might first seem.

Today I’ll talk about some of the features I look for in a an AR-15 and things to keep in mind while making your selection, or selecting pieces to build your rifle.

My perspective for answering this question in this article will be a rifle well suited for defense, extremely reliable and an accuracy of 1″ at 100 yards or better with quality match ammunition.  These qualities will also lend themselves to making an excellent plinker as well.

The stock and pistol grip are two of the most easily changed items on an AR-15.  I’ve seen these two items be the deciding factor, more than once, when trying to decide upon one AR over another.  Given the ease at which you can swap them, these should be one of the last things you look for or base your decision upon.  Keep in mind changing a fixed stock to a telescoping stock will require a bit more work but given my other criteria below, the rifles in question will likely have such a feature already.

One of the things you won’t be wanting to change and that you’ll want to get right from the start is the barrel.  Barrel lengths vary from 7.5″ (which is the shortest I’d ever consider for 5.56)  to 24″ and even longer for those pesky prairie dogs.  Since we are talking a rifle/carbine, I’m not going to talk about barrel lengths below 16″ because without a SBR (short barrel rifle) stamp from the ATF, it’s illegal to have a rifle with a barrel less than 16″.  Yes, you can get a 14.5″ barrel  with a permanently 1.5″ muzzle break but I’m honestly not a fan of this setup in most instances.  A quality 16″ barrel is more than capable of shooting 1″ at 100 yards, and it’s effective range for most shooters will be well beyond 600 yards so with a consideration of self defense I see no reason to go with a longer barrel.

While you are choosing a barrel, realize there is a difference between .223 and 5.56 cartridges. Most manufactures will tell you it’s perfectly acceptable to fire .223 in a 5.56 barrel but 5.56 in a .223 barrel is a no-go.  Given our considerations, you should be selecting a 5.56 barrel.

Twist rate.  For a 16″ 5.56 barrel, the 1:7 twist has become the standard.  It works well enough to stabilize the 55gr round and also allows you to fire heavier rounds reaching into the 70 grain range.  It’s the rate I would recommend.  I wouldn’t select a barrel with a rate over 1:9.

Type / thickness of barrel.  There are so many barrels it can make your head spin.  Lightweight, Heavy (HBAR), fluted, stainless, chrome lined…  This is going to be an area where you are going to have to decide for yourself.  In general I would suggest going with a SS or chrome lined. As to weighting the pros and cons of other barrel options? volumes could be written on the subject and that would be better left for another article.

Handguard (and sights).  Depending on what you are going for the handguard can be very easy to swap out or, if you are going free floated, you’ll have some work to swap it out.  A free floated handguard can improve accuracy for your rifle and depending on what you want to mount (and where) a full length free float can meet virtually any changes you may want to make in the future when it comes to optics, lights, lasers or grip options.  I won’t get into the usefulness of mounting the kitchen sink onto you rifle but attaching a light to your defensive rifle is a must in my opinion.

Keymod, M-Lok or 1913 / Picatinny rails.  1913 rails can be rough on your hands but rail covers are available to negate that.  The jury is still out on Keymod vs Mloc.  I personally like Keymod a little better than M-Lok but this will be a much longer battle than the VHS vs BETA war.  This one will come down to personal preferences and honestly at this point there is no wrong answer here.

Sights come into the mix of the handguard area because if you go with a free float, you have to take into consideration the front sight post, or as I would suggest, a low profile gas block and completely forgoing front sight post/gas block.  A full length free float will allow you to mount back up iron sights directly to it.  Generally I would avoid railed gas blocks as they can cause many issues when trying to use / select a rear backup iron sight.

Gas or Direct Impingement (DI)?  Personally I think if you want a DI rifle, don’t buy a AR15.  Look at something like a SCAR16 instead.  Again this is an area that could take pages to cover, so I’ll leave that for another article as well.

While we are on the subject of the gas system, midlength is what you should be looking for unless you are planning on doing an SBR with a barrel length of 11.5″ or shorter.  Rifle length would be for barrel lengths over 18″ and we aren’t looking at those in this article either.

Charging handle.  It’s so easy to change out a charging handle it’s hardly worth mentioning but don’t let this be your deciding factor, or even a factor at all in selecting your rifle.  That said, keep in mind if you are looking at a rifle with a $100 charging handle in it, that will be reflected in the price of the rifle, a basic charging handle on the other hand runs about $15.

Forward assist.  In todays entry level AR market in order to save money some manufactures are eliminating this feature.  Generally speaking you’ll probably never need it.  Also generally speaking if you ever do need it and your life is on the line, you will really need it. At this point, every rifle that will be fitting into our criteria will have a forward assist.

Trigger.  Triggers in AR’s can be easily switched out so this isn’t a make or break consideration, however keep in mind quality triggers aren’t inexpensive so consider that in the purchase price of the rifle.  Personally I like a two stage trigger in my AR’s.

Backup sights.  I’ll cover these in a separate article but options abound from the low priced Magpul BUIS to higher priced but more robust sights from Troy Industries and even options for tritium inserts.  Other considerations would be fixed or folding, co-witness or lower 1.3 cowitness, offset 45 degree’s… like I said, that’s another article but a basic $50~ set of Magpul’s will get your started if you are on a budget.

Muzzle device.  Break or flash suppressor?  Both serve excellent purposes so it’s going to be dealers choice here.  Assuming you have a threaded 16″ barrel and not a shorter barrel with a permanently attached device, it’s easy to change out later.

If you head is spinning at this point, I’m not surprised.  It’s a lot to take in, especially if this is your first rifle. 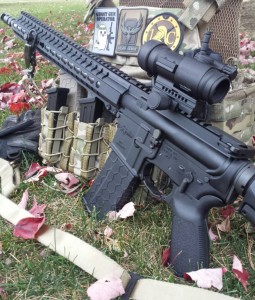 Taking the criteria above in mind and ultimately always getting pinned down into a definitive answer, I’d suggest taking a very close look at the Mk4 RCE from CMMG.

It has a 16.1″ 416SS medium taper barrel, full length free floated Keymod handguard, Magpul MOE pistol grip and 6 position carbine stock and comes with a two stage Geissele SSA trigger.  It’s feature heavy at a respectable MSRP of $1,399 and streets below that leaving room to pick out your own backup iron sights.

Below is a review we did of the CMMG Mk4 RCE –

Let us know your thoughts and some of the things you look for in AR over on our Facebook page- Facebook.com/GunReviews

As an Oath Keeper Joe is known for his staunch, unwavering defense of Liberty and the Constitution. His background in medicine, from the streets as a FF/EMT to a level 1 trauma team, bring a unique perspective to TBS team. As a life long firearms enthusiast you may also recognize him from his work with MAC and as founder of 13C Gun Reviews.
View all posts by Joe →
Reviews ar-15, ar15, assault weapon, buying, cmmg, mk4, purchasing, rce, recce, reece, review, selecting