Number one with a bullet. 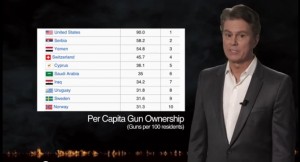 Bill Whittle and Truth Revolt Originals has put out a fantastic video documenting and condensing what we here at 13C have been saying for years.

How can the USA be #1 in gun ownership, nearly twice the second place country, and yet not even be the top 100 countries in the world for murders?  Because that cliche is true.  People, not inanimate objects, murder people.

I won’t rehash what I’ve said before again here and I won’t steal any of Mr Whittle’s thunder, watch and share this far and wide please-