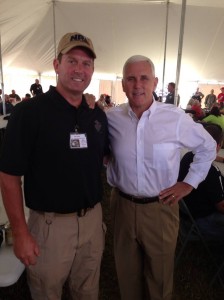 State Representative Jim Lucas has been a supporter of the Right to Keep and Bear arms for some time and now he is leading the charge to make Indiana the Sixth state to have “Constitutional Carry”.

What is Constitutional Carry? It involves repealing draconian gun laws that place undo burdens on law abiding citizens who wish to carry a firearm for self defense.  The term is derived from The Right of the People to Keep and Bear Arms as enumerated in the Second Amendment to the US Constitution.

If it passes, and it won’t without Hoosiers  flooding their Representatives offices with phone calls, emails and snail mail, Indiana would join four other States who already recognize the inherent Right of a free people to defend themselves without first gaining permission from Big Brother.

Before you get concerned, consider this-  Arizona, Alaska, Arkansas, Vermont and Wyoming all currently allow both open and concealed carry by the law abiding without a license, dozens of other states already allow open carry without a license, so this isn’t unfamiliar ground.   Instances of otherwise law abiding citizens suddenly becoming criminals or “blood running in the streets” simply hasn’t happened in those state and, in fact, violent crimes have dropped after “Constitutional Carry” was restored in those states.

Your next concern may be in regards to reciprocity, never fear the bill would leave the Indiana LTCH program intact so Hoosiers can still carry out of state where current reciprocity exists.

Rep. Lucas is also proposing a bill, HB1143, to strike down the ban on carrying for most State owned properties, bringing it in line with many other states and also the current law which prohibits municipalities from banning firearms on city or county owned property such as libraries and parks.   Under Rep. Lucas’ bill State owned colleges and universities would no longer be allowed to prohibit students and faculty from carrying on campus.  Again, no need to fear, many other state already have “Campus carry” and in addition to blood “not running”, you’ve seen me report on several cases of rape thwarted by armed coeds.  This bill would not strike down bans on carrying into prisons, the sterile areas of airports or jails/holding areas.

If you live in Indiana, please take a moment to contact your Representative and let them know you support the Right to Keep and Bear Arms AND the unrestricted Right to Self Defense.   You might also want to contact your State Senator and start turning up the heat there as well.

As a Hoosier myself you can bet I’ll be keep a close eye on this and keep your all updated both here and over on FaceBook.