July 1st will see armed administrators at schools in Monon, IN. 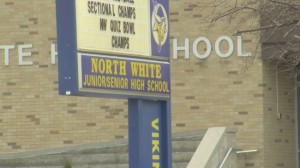 The North White School Corporation has voted unanimously to allow Administrators and school board members to carry concealed firearms in their schools starting July 1st 2014.

“We heard from both sides on the argument,” said Shannon Mattix, board president of the Monon-based district in White County. “Basically, as a board, we stuck with facts and statistics over emotion. It’s an emotional issue.”

Mattix went on to say they considered hiring an armed resource officer but ultimately decided against it for several reasons, including costs.

In addition to being required to carry concealed and with a level 2 or 3 retention holster, those wishing to carrying concealed will also need to take 40 hours of training and undergo a annual psychological evaluation.  They will also only be allowed to carry “a semiautomatic handgun”.  It’s unclear as to reason for discriminating against revolvers.

“First of all, we hope nothing ever happens like that,” president Mattix said, referring to an murderer. “It’s just an additional layer (of protection) in addition to things we’re already doing at the school corporation.”

Here at 13C we applaud the decision to arm these school personnel, even if we disagree with the required psych evals… if these people need an evaluation, they shouldn’t be in these positions to begin with.