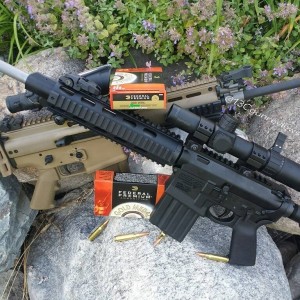 I get asked time and again my favorite .308 rifle and to be honest the SCAR 17 still tops my list.  I was also getting asked, what about your favorite .308 that won’t break the bank?

That’s what initially led me to the DPMS G2 line and specifically the Recon model.  I’ve done reviews on my G2 before but inevitably I’ve been asked to do a side by side on the two.

Reliability wise, I haven’t had a single malfunction with either, so I wasn’t expecting to point anything major out there and as far as handling characteristics, aside from felt recoil, the two rifles are pretty similar.

Accuracy is something I wanted to showcase, the SCAR17 is known for it’s great accuracy for a production rifle.  The reports on the G2 line, and my first hand experience with my Recon have been very positive.  I felt, even given the price gap, the match up might surprise a few people. 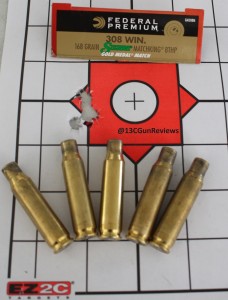 That lead me to this weekend.  I managed to get several boxes of Federal Premium’s Gold Medal Match ammunition, this ammo has a 168gr  Sierra Matchking BTHP bullet.

After getting settled in and acclimated with my new rest, the results were awesome and both rifles preformed admirably.  I also think I’ve found a new favorite .308 round for both these rifles as well.

You can see the full review here:

This has led me to one conclusion.  There must be a part two.  I’m currently lining up a trip to a long range so we can stretch their legs and really see what these rifles can do.

Stay tuned for part two in the upcoming weeks. 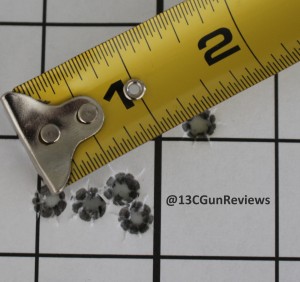 As an Oath Keeper Joe is known for his staunch, unwavering defense of Liberty and the Constitution. His background in medicine, from the streets as a FF/EMT to a level 1 trauma team, bring a unique perspective to TBS team. As a life long firearms enthusiast you may also recognize him from his work with MAC and as founder of 13C Gun Reviews.
View all posts by Joe →
Reviews ammo, ammunition, dpms, federal, federal premium, fnh, g2, gold medal, matchking, recon, review, scar17, sierra