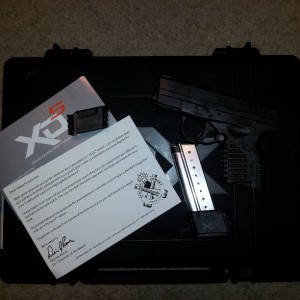 Those of you who follow 13C know I had quite a bit of experience with the XDS 45 prior to buying my XDS in 9mm.  I had a chance to evaluate a few T&E guns as well as those friends and colleagues purchased themselves.

While I wasn’t in a rush for a new EDC (every day carry), or backup EDC to be precise, I did want one in my collection.  So rather than buy when they first came out, I waited until prices settled a bit and picked one up… about a week and a half before the recall.

I did quite a bit of dry practice with it and I had one solid range day with it before shipping it back.  While it wasn’t the most stellar piece I definitely preferred it to some other options like the Ruger LC9 and I placed it just sightly ahead of the M&P Shield.

Now that it’s back… My gut reaction is to trade this thing in on a Shield as fast as I can get to my LGS.  The trigger is pretty bad.  The trigger pull has increased but worse than that, it’s gritty and little spongy.

I heard the trigger on a repaired XDS being referred to as almost “two stage” and the amount of travel is remarkable in and of itself but  I’m not talking about that, I’m specifically speaking to the about the press itself once you take up the slack. Right out of the box it’s horrible.

I wasn’t sure what I was going to expect leading up to today.  I knew I was in for a heavier trigger but beyond that reports have been all over the place from “crisp and constant” and “clean break” to the issues I’m having with my mine.  Some indicate the trigger gets better when it is “broken in”…

Broken in?  I’m sorry, I didn’t realize I bought another Keltec P11.

If it needs to be broken in, then there are problems that haven’t been properly addressed at the factory which result in to poor workmanship and quality control that then manifest themselves into fit and finish problems, or worse.  As to being broken in, I have dry pressed the trigger a few hundred times at this point and the good news is, it is getting better.

Personally I’m shocked SA would send something with a trigger this bad out the door.  It appears to have been test fired before it left the factory, was the person who did the repair actually satisfied with the trigger?

I’ll be teaming up with my good friend Tim from the Military Arms Channel and doing an article over at The Bang Switch over this coming week and taking a closer look at my repaired XDS9 and his unmodified XDS9, including measuring the trigger pull weights.

I’ll also contact Springfield with my results and report back on their thoughts.  Hopefully I just got a lemon and they can get my XDS back to specs.  As unhappy as I am with my XDS right now, I do realize SA had tens of thousands of XDS’ to repair and occasionally a dud is going to slip past their QC.  I’ve had excellent service from SA in the past and I own several SA firearms, from XD’s to XDM’s to 1911’s and M1A’s.