Senator from CA shows his ignorance of firearms in an epic way. 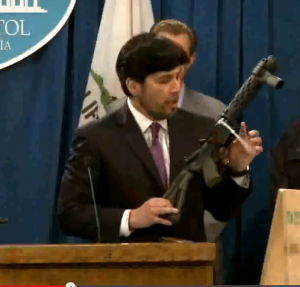 It seems like any time an anti self defense politician from California holds a press conference about firearms they say or do something that shows how little they know about the items they want to ban and the Rights they want to deny you.  State Senator Kevin de Leon took that normal level of  ignorance to an entirely new level the other day.

The issue at hand?  “Printed” firearms.  I’ve covered them before so I won’t address them in this article except to say , we’ll just focus on the Senators complete ignorance of firearms in general.

“has the ability with a 30 caliber clip, to disperse with 30 bullets within half a second.”  Keep in mind, this man wants to ban something he knows nothing about.  He continues- “30 magazine clip, half a second”.

During the press conference you can see a man standing behind the Senator and to his left rolling his eyes repeatedly.  With claims of “thirty magazine clip, half a second”, you have to wonder why he didn’t smack the Senator in the back of his head and offer him a V-8.

Later in the debacle Senator de Leon holds up an AR-15 and starts referring to it as an “automatic sniper rifle”  He also claims it, like the other “ghost gun” was printed in someones garage.

It’s probably important to note the optic and various other items on them, such as an MOE stock and foregrip and harris bipod were not “printed in a garage”. 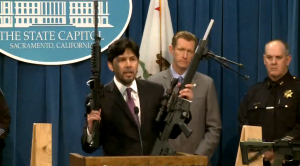 Anyone seeing the shiny stainless steel conspicuously protruding from the end of the “automatic sniper rifle” could also logically assume it wasn’t printed from plastic.

I have to be honest, I couldn’t make it through the half hour press conference.  I felt like I was losing an IQ point for every second that went by.

The 3D printer is the bane of tyrants everywhere.  While it hasn’t been perfected yet, it will allow citizens all over the world to create in their homes the tools of self defense necessary to prevent another Auschwitz or have a more successful Warsaw Ghetto uprising.

Like always the goal of those who support gun control is CONTROL.  It has nothing to do with keeping you or your children safe.

You can watch a clip of the Senators remarks here: