While at SHOT show 2016 I broke news of the new Savage Arms 10 and 110 BA Stealth rifles via our social media pages: Facebook.com/GunReviews and Instagram.com/13Cgunreviews .

While the 10 and 110 series aren’t new to Savage the Stealth is and it shaves down some weight as well as the price tag yet still maintains the features and quality you would expect from the 10/110 line.

Both the 10 and 110 BA Stealth will have a factory blueprinted Savage action as well as a monolithic chassis machined from a solid billet of aluminum in a partnership with Drake associates.  Similar Savage/Drake partnerships in the past have placed well in competitions including first place for a national guard team.  Both rifles will also feature a M-LOK foreend and adjustable accutrigger as well.

The 10 BA Stealth will feature a Fab defense GL-SHOCK six position stock w/ adjustable cheek piece and a EGW one piece scope rail.  It will also have a 5/8 threaded muzzle with a protector and detachable magazine.

The 110 BA Stealth has me very intrigued and will probably help me make the move to .338.  The 110 will also have the 5/8 24 threaded muzzle but will come with a brake.  The stock will also be from Fab Defense but instead be the GLR-16 six-position with an adjustable cheek riser.  It will also come with a Drake one piece long scope rail.

These rifles should be hitting the shelves soon and with an MSRP of about $1,200 for the short actions and about $1,500 for the long actions they should attract quite a bit of attention. 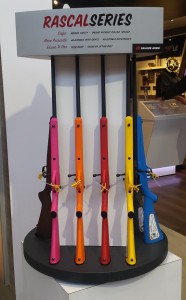 While I was at the booth I also spied something for my youngest daughter.  The Savage Rascal, interestingly enough it comes with a accutrigger which for the price point was something I wasn’t expecting.  It also has some nice features not found on all youth trainer rifles such as cocking while working the bolt and having a feed ramp.

It’s available in nearly a dozen colors, the only hard will be deciding which one… I want to surprise her with one but I don’t want to pick the wrong color, lol.

Look for more updates here and on our social media pages as our coverage of SHOT show 2016 continues.

Thank you for your support and also thank you for understanding the delay in coverage due to the burst pipe and flooding we encountered upon returning from the show, you can read more about that HERE .