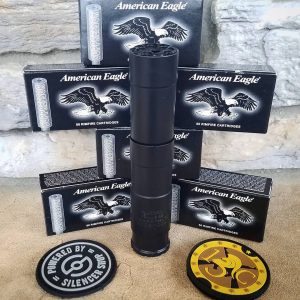 The Rugged Suppressors Oculus 22 silencer. It isn’t often a 22 can reaches up and grabs me right by the feels but this one did.

At 5.25″, 6.9 ounces and 1.06″ diameter in the full configuration it isn’t the shortest, lightest or thinnest can on the market but the extra ounce or so and .06″ is more than worth it when you look at the full picture.

Rugged claims “no first round pop” in the full 5.25″ configuration and honestly I can’t

distinguish one with my ears and neither could anyone else who got to listen to it here live. If there is a dB difference, it’s imperceptible to the naked ear. The tone of the full configuration is fantastic, it’s about as close to “the movies” as you are going to get with subsonic ammunition. 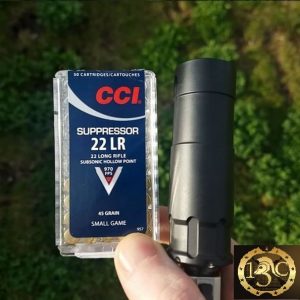 The shortened “K” configuration takes the Oculus down to 3.25″ and 4.3 ounces making it one of the shortest and lightest (tied) .22lr cans on the market. You sacrifice sound suppression with the K config but it’s still well within the hearing safe range and it maintains a very nice tone. The only real issue with the “k” config is the first round pop, it is very noticeable on a handgun but still hearing safe and considering the 3.25″ OAL it’s something very easily overlooked.

Call me “in love” if you like but this is one this silencer you need to consider when you are shopping for your next 22 caliber can. Full specs can be found below.

Watch the full review on the 13C YouTube Channel.

As an Oath Keeper Joe is known for his staunch, unwavering defense of Liberty and the Constitution. His background in medicine, from the streets as a FF/EMT to a level 1 trauma team, bring a unique perspective to TBS team. As a life long firearms enthusiast you may also recognize him from his work with MAC and as founder of 13C Gun Reviews.
View all posts by Joe →
Reviews 22 silencer, hpa, oculus, rugged, silencer, silencer shop