Our new X95 Tavor, fresh from the factory 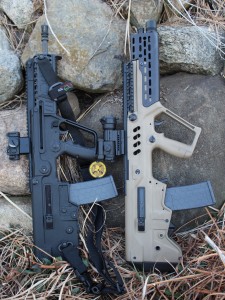 We’ve been reporting on the X95 from IWI for several months and we’ve been dying to get our own.
There are several improvements and changes in the X95 and at the same time some of the things I love about the original Tavor are still maintained.

The X95 keeps things like the 16.5″ cold hammer forged barrel as well as the top rail with folding back up iron sights that lay flush when not in use.  Also retained is the tritium insert in the front sight post.

Some changes include a new trigger OEM trigger pack with a pull that has been lightened to 4-6 pounds.  It’s a crisp trigger and the best factory trigger I’ve ever felt on a bullpup.

The magazine release has been changed and moved forward to a location more familiar to a AR series rifle, it’s also ambidextrous.  The X95 has 5 QD sling attachment points as well as removable panels on the sides and bottom of the handguard that reveal rails for mounting any accessory you might need.  This is a huge step up over the Tavor and it’s OEM handguard.  Pictured above is my OD Tavor with the best solution I found, a Manticore Arms ARC-Lite rail with built in light.

The 13C Gun Reviews YouTube page has a video with more details as well as a quick field stripping segment as well.

As an Oath Keeper Joe is known for his staunch, unwavering defense of Liberty and the Constitution. His background in medicine, from the streets as a FF/EMT to a level 1 trauma team, bring a unique perspective to TBS team. As a life long firearms enthusiast you may also recognize him from his work with MAC and as founder of 13C Gun Reviews.
View all posts by Joe →
News Stories, Reviews ak47, ar15, hexmag, iwi, savvy sniper, tavor, tavor x95, x95