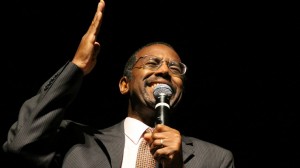 While 13CGunReviews.com was down I wrote several articles as usual, one of them was The Bang Switch and about Dr Benjamin Carson’s Second Amendment statements.

In it I pointed out the confusing nature of his comments which seemed to contradict themselves.

How can you juxtapose those two positions? Making a statement that ‘Rights come from God’ and then saying “It depends on where you live” sounds like something a person suffering from a mental disorder would say. How can a person who claims to believe in God and also claims to believe that your “rights come from God” go on to say that those God given Rights are predicated on where you live?

As Dr Carson said in another speech when speaking about similar contradictions and referencing liberals “in medicine we call that schizophrenia.” I’m inclined to agree doctor.

It’s definitely bizarre, you can read my full article,, including full citations HERE .

Give us your thoughts over on our FaceBook Page and what you think the reason for Dr Carson’s inconsistencies .