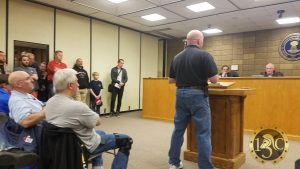 Roughly 48 hours ago news broke that the LaPorte County Commissioners would be considering a ban on the use of firearms (and potentially air guns, bb guns and even bow and arrows and other devices capable of firing a projectile) within 1,000 feet of a residence.

This evening Citizens packed the commissioners meeting to voice concerns.  The room was at capacity, for both seating and standing room and the wallway outside the meeting room was completely filled.  Staff had to open the adjoining room and doors to accommodate the crowds.

Earlier the Commissioners had removed the proposed ban from the agenda but scores of furious residents attended the meeting anyway. 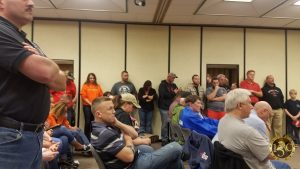 At the beginning of the meeting Commissioner Kora (D) introduced a motion to form “a committee of stake holders” that could take public input on a possible future ban and to have a venue for the public to full comments.  The motion was seconded by Commissioner Gonder (R) and passed.

Before the start of public comments  Commissioner Gonder, sitting in for Commission President Mrozinski (R) (who was on vacation), indicated public comment try to be limited to items on the agenda and items related to the ban be saved for a public meeting and committee of stakeholders that was passed earlier in the meeting. 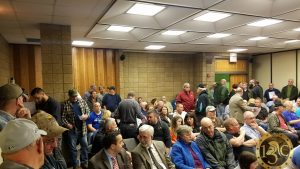 Concerned citizen Dennis M. opened the public comment expressing concern that at the start of the year, in January, the Commissioners had said 3 minute public comment would be allowed on anything relating to the county, a ‘stark turn around from the previously Democrat controlled County Commission’.

After a very vocal and vociferous debate between the next couple of residents about the issue of an open public comment period Commissioner Gonder allowed comments to be fully opened to the firearm issues and asked that it remain ‘civil’ and limited to the 3 minute window.

Dozens of Citizens spoke against the proposed prohibition with passion and conviction, including a few very well spoken younger residents of the county, one of which indicated she was 13 years old and participated in 4H shooting events in the county.

The theme echoed over and over again by residents was one of how safely all of their shooting on private property.  One citizen commented: “one bad apple doesn’t mean you throw out the basket”

Another issue touched on numerous times was in regards to enforcing the state laws already on the books in regards to criminal recklessness and should any actual property damage occur.

Yet another resident asked, “How many times, if ever, has anyone ever been injured by shooting on neighboring property or if any damages have ever occurred?”  Neither of the Commissioners nor the county attorney, Doug Biege, could cite a single incident.

While commenting another citizen, Joe H., said he ‘didn’t think the committee was needed but since it was already passed, he would serve on it’ at an earlier request made by Commissioner Kora.  He went on to cite Indiana state code that could be used by the Sheriffs department instead of enacting any new ordinances to deal with the one or two issues that were allegedly occurring in an unincorporated subdivison in the county.   He also commented on ‘the refreshing change from the previous Commission in allowing open public comment’ and thanked the Commissioners for a more open public comment segment.

“Who introduced the ban”  and “Who asked the ordinance be drafted” were two questions asked over and over again.  County Attorney Biege stated he authored the draft but cited “attorney client privilege” and that he couldn’t divulge who asked him to do so. 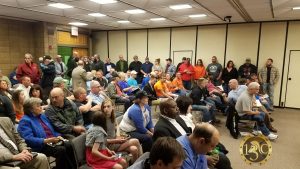 With over 90 minutes of public comment not a single citizen spoke in favor of the proposed ban and by the end of the meeting the Commissioners voted again, this time to repeal the formation of a “stake holders committee” and declared the issue was “dead” and would not, and could not, be addressed again for at least another year.  Commissioners cited rules prohibit voting on an issue that has been voted on/considered from being voted on/considered more than once a year.

While public comment may have been a bit heated at times, everyone in attendance conducted themselves well for such a emotional topic that resonated deeply in the hearts of citizens concerned about their Rights to Keep and Bear Arms.

As one citizen commented “This is an amazing display of democracy in action”.

After the meeting dozens of concerned citizens talked in the hallway and outside and vowed to “stay on top of this issue, just in case they try something else in the future”.

As an Oath Keeper Joe is known for his staunch, unwavering defense of Liberty and the Constitution. His background in medicine, from the streets as a FF/EMT to a level 1 trauma team, bring a unique perspective to TBS team. As a life long firearms enthusiast you may also recognize him from his work with MAC and as founder of 13C Gun Reviews.
View all posts by Joe →
News Stories, Political ban, firearm ban, shooting ban