USSC ruling on straw purchases… felonies for everyone. 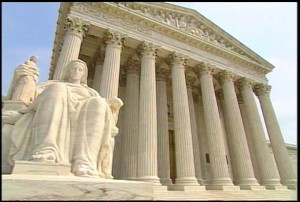 In a shocking display of contempt for the Constitution, not to mention the actual laws enacted by Congress, the USSC ruled 5-4 today that any person buying a gun for any one else is committing a felony.  Period.

Wife buying for her Deputy Sheriff husband with no criminal record?  Felony.  Period.

The ruling stems from a case where a police officer bought a Glock handgun (presumably for the LEO discount) and then sold it immediately there after to his law abiding uncle.  Neither party was a prohibited person at the time.

Previously the law was meant to prohibit a person with a clean record from buying a firearm for someone who was prohibiting from buying it themselves.  That made sense.  This current ruling steps completely beyond the current laws scope.

Justice Kagan tried to justify the Majority opinion by saying: “No piece of information is more important under federal firearms law than the identity of a gun’s purchaser — the person who acquires a gun as a result of a transaction with a licensed dealer.”

Judge Scalia wrote the scathing dissenting opinion and had this to say:
“The court makes it a federal crime for one lawful gun owner to buy a gun for another lawful gun owner.  He continued, “Whether or not that is a sensible result, the statutes Congress enacted do not support it.”

This is another blow for the Right to Keep and Bear arms by the Supreme Court which ruled earlier in the year that ANY ‘domestic violence’ incident disqualifies a person from self defense, even “offensive touching”.

As an Oath Keeper Joe is known for his staunch, unwavering defense of Liberty and the Constitution. His background in medicine, from the streets as a FF/EMT to a level 1 trauma team, bring a unique perspective to TBS team. As a life long firearms enthusiast you may also recognize him from his work with MAC and as founder of 13C Gun Reviews.
View all posts by Joe →
News Stories, Political straw purchase, straw purchaser, USSC