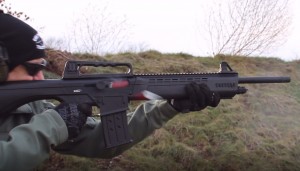 TriStar prides itself on being the “Value Experts” and their lines of hunting shotguns have been well respected for years.  The KRX is definitely a departure from more classic style shotguns the company has been known for.

Externally patterning itself the beloved AR-15 it has very familiar controls.  The magazine release, bolt hold /release and safety are all in the traditional locations and the shotgun features the last round bolt hold open feature as well. 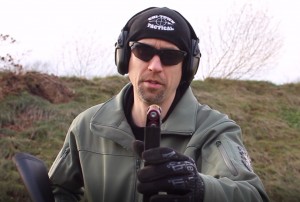 The magazines are metal and well made featuring a solid anti-tilt follower.  The KRX ships with two 5 round magazines and my sources have confirmed that 1st quarter 2017 will bring 10 round magazines that will sell separately.  Unofficially I’ve heard MK1919 magazines can be modified to work in the KRX but I don’t have independent confirmation on that.

Continuing the AR15 path it has front and rear AR style sights with the rear carry handle featuring adjustments for both wind and elevation.  Front and rear sights are both removable and the top features a full length rail.  Underneath the hand guard is a section of picatinny rail for mounting whatever accessories you might like, such as a light.

Weighting in at 7.4 pounds it’s definitely on the lighter side for a “tactical” style shotgun and it handles and balances very nicely even with the 20″ chrome lined barrel.  The barrel is also threaded for the popular Beretta Benelli Mobil Style chokes and ships with an open cylinder.

The overall fit and finish of the shotgun is good, in so much as it is a solid shotgun.  There is no slop in the components and the handguard locks up nice and tight.  One of the dings I’ve had with other lower price point AR style shotguns is how flimsy they feel in the hands.  The KRX feels better in the hands than it looks.

Coming it at an MSRP of $595 and what appears to be the current street price of just under $500 the “Value Experts” have done a good job right out of the gate.

For more information and a shooting review with Slugs, Buckshot and birdshot be sure to check out the 13C YouTube Channel here and the corresponding video to this article:

As an Oath Keeper Joe is known for his staunch, unwavering defense of Liberty and the Constitution. His background in medicine, from the streets as a FF/EMT to a level 1 trauma team, bring a unique perspective to TBS team. As a life long firearms enthusiast you may also recognize him from his work with MAC and as founder of 13C Gun Reviews.
View all posts by Joe →
Reviews 12ga ar15, ar15 shotgun, krx, shotgun, tristar, tristar krx