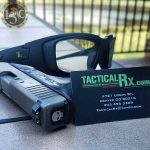 Eye Pro is a question we get frequently here and protecting your eyes is paramount.  You only get one pair and you need to keep them safe.  Clear vision also aides immensely in the shoot sports.

We first came across TacticalRx nearly two years down in Florida at the Big 3 East training Center.  I spoke briefly with Bret Hunter about his company and some of technology they employ with their designs.

Unfortunately I was woefully unprepared to digest the initial knowledge he imparted upon me, so I put it on the back burner until I could do some research.  “Curved lenses with a Rx throughout the curve” that he invented, “every pair custom and handmade in the USA”…  I’ve had more than my share of ‘snake oil’ salesmen claim their product was a one of a kind or head and shoulders above others, so I tend to take things with a grain of salt and in areas that are outside of my expertise, two or three grains of salt. 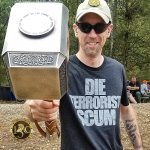 He did give me a pair of his Mt. Falcon non prescription eyewear, told me to try them out and tell him what I though about the frames and how they worked out for me.  I did and I was impressed with the their quality and fit.  When I ran into him again about 6 months later I not only had some experience with his Mr Falcon’s but also I had done some research on what he talked to me about earlier in the year.

I wound up ordering a prescription pair of the Mt. Falcon’s and I couldn’t be happier with them.  The technology Bret spoke of, and in fact INVENTED himself, allows his company to put your prescription into the FULL curve of the lenses.  As someone who had spent their life looking through flat lenses (when not wearing contacts), it’s a truly eye opening experience.  You have your corrected vision everywhere you look, to the full extremes of your peripheral vision.  The pair I ordered also has transition technology so in sunlight the lenses tint. 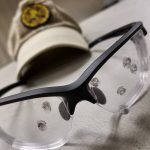 During our time at the Big 3 East, Bret subjected his Mr Falcon glasses to a blast from a 12ga steel shot 3″ shell from 15 feet.  The results speak for themselves, they exceed both ANSI Z87 and PRF-31013 standards and testing.

After using the Mt Falcons for about a year, I found a fatal flaw… I wanted to wear them more often but in more social situations, and at the day job, they just didn’t fit in, lol.  I spoke with Bret and a couple of months ago I started wearing their latest frames, the Little Bear.

They have the same great quality, light transmission and safety ratings but in a somewhat less “tactical” or sporty look and I like having the option between the two.  These also have transition lenses.  At this point I rarely wear my “normal” glasses anymore.

After using the Mt. Falcon’s for over a year and the Little Bear’s for a few months now, I can’t speak highly enough about their quality, fit and finish.  They have lived up to and exceeded all my expectations.

You can find the video review of these glasses as well as an interview with Bret Hunter and some frequently asked questions from subscribers over on the 13C YouTube Channel .

As an Oath Keeper Joe is known for his staunch, unwavering defense of Liberty and the Constitution. His background in medicine, from the streets as a FF/EMT to a level 1 trauma team, bring a unique perspective to TBS team. As a life long firearms enthusiast you may also recognize him from his work with MAC and as founder of 13C Gun Reviews.
View all posts by Joe →
Big 3 East, Reviews eye pro, safety glasses, tacticalRx