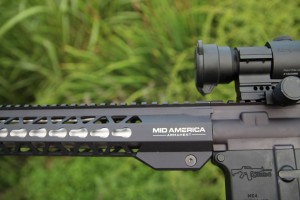 Mid America Armament has a new Rapid Take Down Kit out featuring a free float rail with a quick release lever and matching barrel nut to replace your existing barrel nut.

The system allows you to go from a rifle broken down into several smaller components to a fully assembled ready to shoot rifle in under 30 seconds.

Caliber changes, from 5.56 to .300 blackout for example, can be accomplished in under a minute if you pick up an extra barrel nut.

In our preliminary testing it would appear that point of impact shifts are about 1.5″ or less at around 100 yards.

The full review, including more testing of the new Hexmag Series 2 magazines, is live on the 13C YouTube page –

As an Oath Keeper Joe is known for his staunch, unwavering defense of Liberty and the Constitution. His background in medicine, from the streets as a FF/EMT to a level 1 trauma team, bring a unique perspective to TBS team. As a life long firearms enthusiast you may also recognize him from his work with MAC and as founder of 13C Gun Reviews.
View all posts by Joe →
Reviews .300, 300 black out, 300blackout, 300blk, ar15, qd, quick detach, rapid take down, rtd