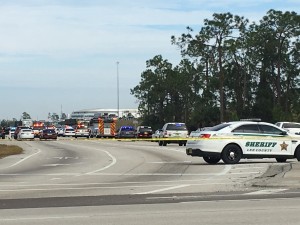 Breaking news out of Florida:

After a high speed pursuit that reportedly topped 120mph the suspect was finally stopped on a ramp off of I-75 near Estero, FL.

Witnesses report that the Deputy and suspect exited their vehicles nearly simultaneously and the suspect immediately charged the deputy “violently throwing him on the ground and proceeded to beat him”.  Other witnesses confirm the suspect had mounted the deputy and was “beating the officer to death”.

The deputy has already been released from the hospital and expected to make a full recovery.

We’ll have more information on this as it unfolds on our Facebook Page .

***News outlets are reporting they are looking “into the legality of the CCW holders actions”.  As a former Florida resident I can tell you with the information currently being reported that this CCW holder acted fully within the law by using deadly force to stop this heinous attack.

As an Oath Keeper Joe is known for his staunch, unwavering defense of Liberty and the Constitution. His background in medicine, from the streets as a FF/EMT to a level 1 trauma team, bring a unique perspective to TBS team. As a life long firearms enthusiast you may also recognize him from his work with MAC and as founder of 13C Gun Reviews.
View all posts by Joe →
News Stories ccw, Concealed Carry, deputy, good guy with gun stops bad guy with gun, officer, officer invovled shooting, shooting