As if the bungled “Fast and Furious” debacle couldn’t get any worse, there are reports breaking that one of the firearms used in the November 2015 Paris terrorist attacks came from Phoenix, AZ and an individual with ties to the program. 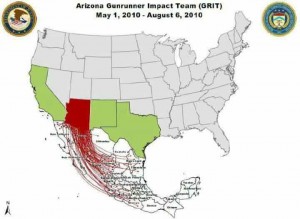 For those not familiar with the “fast and furious” program the short version is the government ok’ed the sale of firearms to known criminals in the hopes of busting more criminals.  The overwhelming majority of cases had criminals getting away with weapons scot-free and little to know prosecutions.  These firearms have been linked to numerous crimes both in the US and abroad including the  murder of a US Border Patrol agent and one firearm winding up in the hands of a would be jihadist in Texas.

If that sounds outrageous, understand that Fast and Furious didn’t occur in a vacuum. Other “operations” with movie titles, such as Castaway, occurred all over the county and saw many weapons allowed to fall into the hands of criminals, including being sent out of the country.

It’s still a bit too early to tell if this firearm was a direct result of Fast and Furious but considering the information Judicial Watch is obtaining, I’d be putting money on it coming from the program.

We’ll have more information available on this when it becomes available both here and on our social media pages.

As an Oath Keeper Joe is known for his staunch, unwavering defense of Liberty and the Constitution. His background in medicine, from the streets as a FF/EMT to a level 1 trauma team, bring a unique perspective to TBS team. As a life long firearms enthusiast you may also recognize him from his work with MAC and as founder of 13C Gun Reviews.
View all posts by Joe →
News Stories, Political attack, fast and furious, gun running, paris, terrorism, terrorist