Couple turns the table on 3 armed attackers outside grocery store. 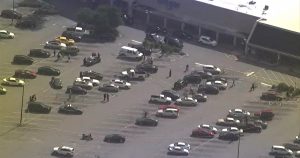 June 15th, 2018 a date one couple will likely remember for the rest of their lives.  The as yet unnamed couple had just checked out of a Kroger grocery store in Dekalb County, GA when 3 armed men followed them out into the parking lot and attempted to attack them.

Unknown to the assailants one, and likely both, of the couple were armed when they were randomly targeted last Friday afternoon.  When the smoke cleared all three would be attackers were shot and injured.

Given the witness statements it seem both luck and skill were on the victims side because neither of the couple were harmed during this brazen daylight attack.

Witnesses described the hearing the gunfire seeing the scene unfold as both “chaotic” and “fast paced”.  They also described the actions of the male member of the couple, witnesses seemed to indicate the male victim, in addition to reloading at least once, changed positions and moved from vehicle to vehicle during the incident while defending himself.

Kudos to this couple for keeping their cool and fighting off three determined attackers.

At this time charges are “unlikely”.  Detectives say they are “still investigating … it appears the victims were randomly targeted by the three assailants” and the victims “acted in apparent self defense”.

I have long advocated a persons carry gun should be as full sized of a handgun as they can carry as well as at least one spare magazine.  While this incident is definitely outside of the norm for a self defense shooting, it proves once again that not all criminals instantly flee at the sound of gunfire and some are extremely determined and press the attack, even in broad daylight.

As an Oath Keeper Joe is known for his staunch, unwavering defense of Liberty and the Constitution. His background in medicine, from the streets as a FF/EMT to a level 1 trauma team, bring a unique perspective to TBS team. As a life long firearms enthusiast you may also recognize him from his work with MAC and as founder of 13C Gun Reviews.
View all posts by Joe →
News Stories attack, self defense, shoot out