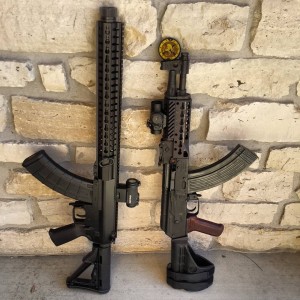 In our initial first look video on the Mk47 AKS13 “Mutant” from CMMG we looked at some reliability and various upgrades in the second generation of Mutants I encountered at SHOTshow 2016 this year.

After 2 months of shooting and testing we’re ready for the full review and I can officially give the 13C stamp of approval to the AKS13.  It’s done extremely well with everything we’ve thrown at it and the accuracy is really outstanding.

The video is live on the 13C YouTube page and answers a few questions you’ve asked as well such as the magazine release and what other mags I’ve tried in it.

As an Oath Keeper Joe is known for his staunch, unwavering defense of Liberty and the Constitution. His background in medicine, from the streets as a FF/EMT to a level 1 trauma team, bring a unique perspective to TBS team. As a life long firearms enthusiast you may also recognize him from his work with MAC and as founder of 13C Gun Reviews.
View all posts by Joe →
Reviews ak47, aks 13, ar15, cmmg, mk47, mutant