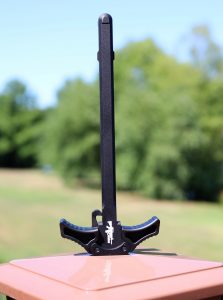 CMMG released some new ambidextrous charging handles recently and we very pleased to see they released one for their Mk47 line of rifles, in addition to one for the AR15.

When we review the Mk47 AKS13  Mutant about 2 years ago a major feature of the rifle was the 30 cal BCG and ability to take AK47 magazines.  The downside to that was a rifle which couldn’t have a last round bolt hold (due to the ASK47 mag compatibility)  and the lack of easy replacement of the charging handle.

My request has been answered.  You can find the review of both CMMG Ambi charging handles at the 13C YouTube Channel .

As an Oath Keeper Joe is known for his staunch, unwavering defense of Liberty and the Constitution. His background in medicine, from the streets as a FF/EMT to a level 1 trauma team, bring a unique perspective to TBS team. As a life long firearms enthusiast you may also recognize him from his work with MAC and as founder of 13C Gun Reviews.
View all posts by Joe →
Reviews ambi, ar15, cmmg, mk4, mk47, mutant