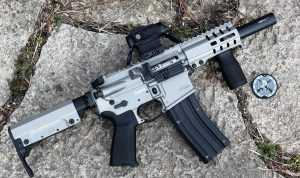 Brand new to CMMG this Friday April the 13th 2018 is their new Mk4 Banshee line.  The Banshee is a line of Short Barreled Rifles (SBR’s) and pistols chambered in offerings from .22lr to .300 blackout.

One of the features unique to the SBR is the new RIPSTOCK.  The RIPSTOCK is, as the name would imply, deployed by pulling the stock to the rear vs having to first depress a button to release it. Closing the stock is done in the usual fashion by depressing the lever under the the back of the stock.  It also features a movable screw to allow to pre set the length of pull when you “rip” it.

We had the Banshee 22 in for testing which is chamber in .22lr, of course.  After the initial break in period of roughly a couple hundred rounds it ate everything we fed it reliably including various 500 round bulk packed ammo.

Between myself and my daughters we put roughly 1,000 rounds through this Banshee (the first 1,000 this rifle had seen) in the span of two afternoons.

The pistol version of the Banshee will delete the forward grip and swap the RIPSTOCK for a Tailhook 2 brace instead.

Pictured above is the Mk4 Banshee 22 with the DefCan 22 silencer.

You can find the full review on the 13C YouTube Channel –

As an Oath Keeper Joe is known for his staunch, unwavering defense of Liberty and the Constitution. His background in medicine, from the streets as a FF/EMT to a level 1 trauma team, bring a unique perspective to TBS team. As a life long firearms enthusiast you may also recognize him from his work with MAC and as founder of 13C Gun Reviews.
View all posts by Joe →
Reviews ar15, banshee, cmmg, defcan, silencer