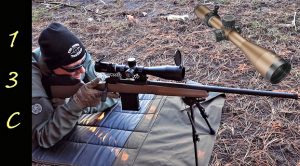 Happy New Year everyone, it’s the last day of the year and here is our final article for the year as well.

Today we’re looking at the Forge from Bushnell, our model is the 4.5-27×50 optic with the Deploy MIL reticle in the First Focal Plane (FFP).  Coming in with an IPX7 Water Proof rating and weight roughly 29 ounces, the Forge sits at the top of the trio launched in 2018 which also include the Prime and Nitro, for features and price points.

Setting the Forge ahead of the pack, at least the model we’re looking at today, is the FFP reticle, enhanced throw lever aka “Throwhammer” as well as RevLimiter zero stop and T-Lok turrets. An EXO barrier also coats the glass to help with rain and fog, as well as debris and smudges. 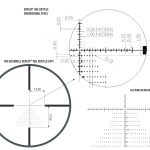 Here on the farm we spend time glassing at night as well as doing some predator control.  Bushnell’s HDOS (high definition optical system) is also in the Forge line and does a good job of gathering light at dusk as well as gathering a surprising amount of moonlight.  This is where the lack of an illuminated reticle comes in, considering how well the optic gathers light for it’s price point, it’s a shame Bushnell didn’t include an option for an illuminated reticle in the Forge series.  For most hunters or shooters where they will never be out at oh dark thirty, and if they are they would probably be using NV or Thermal, this won’t be an issue but for the handful of nights per month that allow for predator control under a full moon, it would be a nice addition.  A caveat on the light gathering under moonlight, it does it’s best from 4.5x to about 18x, which is typical in my experience.  Rarely would I use an optic zoomed beyond 7x~ for predator control purposes but it’s nice to have the extra reach there for other applications. 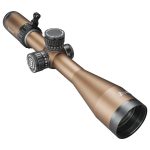 The RevLimiter zero stop is straight forward to set and can be done with the included tools fairly simply if you read the included instructions.  The turrets themselves are both tactile and audible while adjusting them so you can both feel and hear the clicks, even with hearing protection on.  The side paralax adjustment ranges from 25 to 500 yards with an infinity setting as well.

Other Forge models can be found in 2.5-15x50mm and 3-18x50mm and have options for a Deploy MOA reticle in either the FFP or SFP as well as an option for their new terrain color.

We will be continuing our work with the Forge in an upcoming video with the Savage 110 Tactical, take a moment to subscribe to our newsletter and social media channels so you can stay up to date.

You can find the full review on the 13C YouTube Channel .

As an Oath Keeper Joe is known for his staunch, unwavering defense of Liberty and the Constitution. His background in medicine, from the streets as a FF/EMT to a level 1 trauma team, bring a unique perspective to TBS team. As a life long firearms enthusiast you may also recognize him from his work with MAC and as founder of 13C Gun Reviews.
View all posts by Joe →
Reviews 110 tactical, 6.5 creedmoor, bushnell, deploy, forge, mil, optic, savage, scope